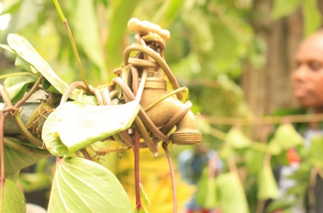 Thursday the 20th of September, 2018 marked a historic day for the community of Sibiombu, Erromango as the Department of Water Resources (DOWR) Director, Mr. Erickson Sammy launched their fully installed and functional water supply.

The village of Sibiombu sits on the Eastern part of Erromango, where the only means of access is by boat on the rough ocean waters and boat fare to and from Ipota is above Vt10, 000 per trip. No infrastructure in place means they have no easy access to roads, shops, schools, health facilities and safe clean drinking water.

To collect water for drinking, cooking, washing and bathing the people of Sibiombu have to walk a distance of roughly 200 – 300 meters.

The DOWR contracted Spring Life, in 2015 in response to the El Nino crisis to set up water systems in a number of locations in Vanuatu and Sibiombu community is the first one to be successfully accomplished.

Also representing the Provincial Government was the Area Administrator and delegated high chiefs of the area including one chief residing in Vila.